Out of My Comfort Zone

Iceland’s Kirkjufell Mountain is a photographic icon and wanted to capture it with the Northern Lights illuminating the night sky. The photography group I planned to meet up with later in the week did not have this on the itinerary and the Snaesfellsnes peninsula was a doable, solo trip.

Most flights from the U.S. arrive in Iceland in the early morning and this time of year it is dark until late in the morning. Driving in the dark, cold, foreign country, in an unfamiliar car, on little sleep is not the best plan, but no turning back at this point! As I drove past Iceland’s captial; Reykjavik, the traffic thinned and the sun started to rise. The landscape was captivating and what should have been a 2 hour drive turned into 5! I stopped to pet a friendly horse, take multiple photos of incredible landscapes and ended up at the hotel in perfect time to check in.

I spent the next day exploring the peninsula and ended at Kirkjufell to photograph in the daylight. I took a nap after dinner and set the alarm to get up when the Northern Lights were supposed to appear. When I awoke, a faint light appeared in the night sky and my camera’s sensor confirmed it was the Northern Lights from the safety of my room. Now I had to muster the courage to start driving over the mountain pass, at night, alone, and in a snowstorm. I called my significant other and he encouraged me to go for it! He and I knew that I would be disappointed in myself if I didn’t try. My pack held extra clothes, food, water, and a GPS unit and felt reasonably prepared. Sheepishly, I crept around the quiet hotel lobby and couldn’t get the door unlocked and cringed as I called the owner on the after hours line. She said to give the back door a try and to be careful. I’m sure she thought I was absolutely crazy, because I sure did!

The drive on the mountain pass was daunting, but took it slow and tried to remember to enjoy myself. The parking lot was empty at this late hour and swallowed hard looking up toward the trail with the stars twinkling in the sky. I pushed onward, up the trail, with my little flash light bouncing in the dark to the spot I had picked out earlier. It was DARK and COLD and the waterfall noise loomed in the background. I was a little freaked out, but had made it this far… and couldn’t go back now. The first images lit up on the back of the camera and the fear turned into excitement wondering what the next exposure held.

All in all, the images were O.K. and I’m learning to go with that. I’ve seen better Aurora images from this location, but they weren’t mine and I have the experience under my belt and a story to tell!

Do you ever do anything to push yourself? What do you do to encourage yourself and go for it? 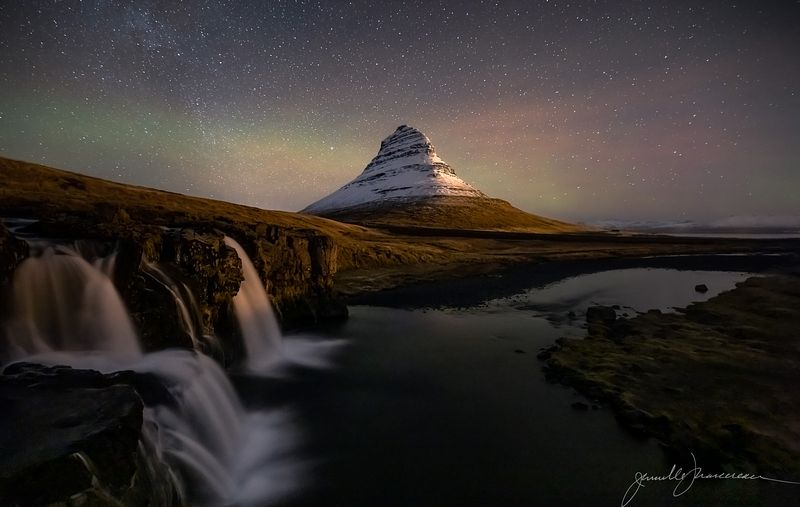